Ligne 2 - Spawn - Base Lunaire Française is a railroad line on the Moon. It was created by Le_roi_1_111. The line is owned by the Compagnie des Chemins de fer Lunaires Françaises (documentation at the bottom of the page).

Drawing of the line 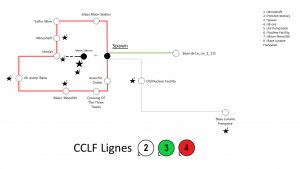 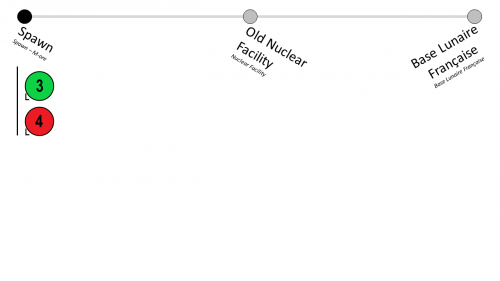 Currently, the line is running again, but with 1 train removed, making a total of 1 train on the whole line.

Traffic disrupted by the latest version of the server: Trains stopped if a player is not in a perimeter close to a train.

The line contains 2 terminals, and one station :

This is the first station that was created on the line. It's a little close to the Moon spawn.

The delay between each train is approximately 2'50".

Railways do not have vacuum evacuation systems. Air Zones are available in each station. Always wear a space suit!

The line has 2 trains per track, with each train containing 3 cars.

Currently, if a player is not in a perimeter close to a train, the train gets stuck. As a result, the trains stop and the line is interrupted.

If you're pretty good at railroading, you might be able to help me set up brake lights for trains. Send me an email in game!