L'Isle-sur-mer is a little village on Earth, under construction. It is part of Terra Marique, a French-English territory.

The inhabitants are called marisliens.

L'Isle-sur-mer has many caves under its ground. Some of them are re-capped.

The village has for the moment only a sea or large lake, and no river nearby.

After the semi-abandonment of the Station Lunaire Française, Le_roi_1_111 wanted to settle on Earth to create a small independent territory/State oriented towards France to gather all the French of Pandorabox in the same place, even if a village (Français City or Village des compagnions français) has the same role which is to gather a certain number of French in the same village, but no rule is established in terms of building model. 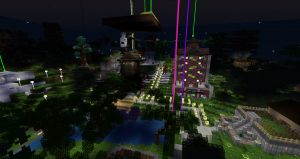