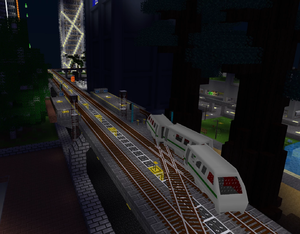 View of Tardis Station from above. Tardis is the de facto central station and the interchange between S1 and U1 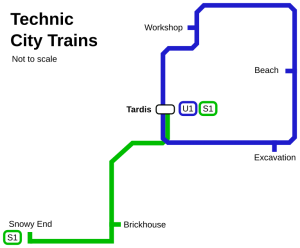 Early proposed services map of TCT which shows the network geographically to scale.

Technic City Trains (TCT) is a railway operator in the greater Technic City area. Its authority is delegated by BuckarooBanzai to Blockhead for the purpose of building railways and stations and operating trains in the area. Kermit is also a helpful contributor. It operates two lines and will co-operate with PRC to ensure any regional connections.

The U1 line operates two kinds of services: Clockwise and anticlockwise. The stations (in clockwise order) are have the names: Tardis, Workshop, Beach and Excavation. In Stage 2, clockwise services are proposed to stop at a new station at Technic City Harbour, which is between Excavations and Beach. Anticlockwise services will go straight from Excavations to Beach. Future metro lines will have a stop spacing of around 100-150 metres.

The S1 line operates out of a terminal track at Tardis station and stops at Brickhouse and Snowy End. Future local lines will have a stop spacing of around 400-600 metres.

The TCT network constitutes a central ring line around the centre of Technic City and a short local railway line that leaves the city going southwest and then west. It was constructed by BuckarooBanzai possibly with help from others.

The central ring line is entirely elevated, a la the Chicago "L". The viaduct continues southwest out of the city and ends just before Brickhouse Station, then starts again as the terrain falls into the ocean going west. Track spacing varies from 3 to sometimes just 1 node between tracks. In future 3 node spacing should be preferred.

TCT operates trains on the left hand side (left hand traffic). The freedom of choice was given to Blockhead by BuckarooBanzai, so Blockhead chose his preference as an Australian. This also means that signals are preferred to be located on the left hand side of the track that they apply to where physically possible; in some cases it is better for driver vision to place signals not in line with the general rule.

TCT uses a mix of wallmounted signals and Ks signals. The wallmounted type are preferred for the metro services whereas Ks are preferred for local trains. A signal gantry design that uses green nodes from bridger is used on the local line to Snowy End, which looks surprisingly close to real German signalling installations (left-hand traffic notwithstanding).

On metro lines signals have a spacing of around 50 metres and on local lines around 100 metres.

TCT only has a small roster of rolling stock due to the difficulty of acquisition with complicated recipes. At beginning of operation it has 2 subway wagons, one for each direction on U1, and one 3-car Japanese train for S1. Shortly after opening, U1 was supplemented with two another subway wagons.

TCT was founded on 23 November 2021 after Blockhead volunteered to operate trains in the area after noticing there was a decent amount of right of way already in place. Authority was quickly given to allow him to work on the railway. The protections were surveyed and major access issues resolved by BuckarooBanzai.

The S1 line was in operation by Friday 26 November but its opening was not announced and signage was not yet complete.

TCT officially opened services on 3 December 2021. Two Subway wagons were provided for U1 by Kermit, and the S1 was already operating with Japanese wagons bought from admin shop. Station signage and a the passenger services map were completed on this date. Mapserver blocks were also added although they look rather rough since the mapserver draws straight lines instead of nice polygons. On 12 December 2021 rolling stock of U1 has been expanded with another two wagons from the same donor.

TCT does not yet have plans to extend or build new railway lines. There is a hope to extend U1 to Technic City Harbour in future, but this is conditional on permission from Ruggila.

A larger central station for Technic City needs to be planned in order to prepare for an increase in the number of services, whether local or regional and operated by TCT, PRC or others. A site is not yet identified.